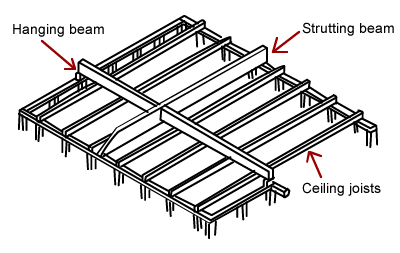 Ceilings in most modern homes use wooden joists and beams.

What are ceiling joists and beams?

In regular light-frame construction and conventional roof framing, the ceiling is constructed using an arrangement of timber joists and beams that run across the length and width of the ceiling. Other materials, such as metal and concrete, may also be involved in making a ceiling. Joists and beams create the ceiling of a room, and support the ceiling cladding (the part that's visible). Ceiling joists also help to anchor the walls to prevent them from collapsing inwards or outwards, and help to keep the roof up.

How are joist and beam style ceilings constructed?

Constructing ceiling joists is part of the overall process of building the frame of your home. Once the wall framing has gone up, the ceiling joists can be put in place. The joists run horizontally between opposite walls, and attach to the tops of the walls with a wall plate. Building regulations dictate how many joists need to be installed, the distance between them, and how thick they should be. Once the joists have been constructed, other beams are installed which help support the walls and roof of your home.

What are the different parts of joist-style ceilings?

What are they clad with inside houses?

Typically, the ceiling joists and beams are clad with plasterboard to create a flat surface for your ceiling. Other materials can also be used to clad the joists and beams, including metal and timber. There are many options for ceiling finishes and cladding.

What are the load bearing capabilities of ceiling joists?

Unless you have a flat roof, the ceiling joists and hanging beams are in place to support the ceiling only. They will not support a pitched roof load - this is the role of the strutting beams. How Often Does a Swimming Pool Need Maintenance

What Is Better Choice For Windows? Single Glazed Or Double Glazed 5 DIY Carpet Cleaning Hacks That Will Ruin Your Carpet