Cisterns have undergone some big changes in recent years with a worldwide focus on reducing the amount of water used in each flush. When this trend first began, many users were turned off by the lack of power in water efficient toilets, but this has led to some remarkable advancements in pipe and cistern design which have completely overcome this problem.

Cisterns are normally differentiated in terms of their volume, their flush capabilities, and whether or not they're gravity fed or pressure fed systems. 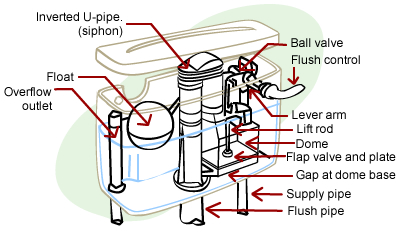 Gravity fed cisterns are the norm in Australia.

A cistern needs force to be able to push water into the toilet bowl. It can achieve this in one of two ways - either via gravity, or by using a system that pressurises the stored water and shoots it out when the flush is activated.

Gravity fed toilets account for the vast majority of toilets in Australia. Water fills a tank sealed off by a flapper from the bowl. When the flush is pushed, the water drops into the bowl. This creates a pressure difference between the extra water and the air sitting in the trap just around the first bend in the toilet's plumbing. The pressure difference creates a siphon effect, which pulls the waste out of the bowl and down the trapway. Because the water in the cistern is now low, the float valve engages, which refills the cistern until the water is high enough, and the float returns to the correct position, disengaging the valve. If you lift the top off the tank in your cistern and see water, you have a gravity fed system.

The older style of toilet with a chain-pull has the cistern mounted quite high on the wall. This is designed to increase the force of the water coming down from the cistern. These models are rarer these days, but are still in use in some properties and can be retrofitted with more modern technology.

Pressure assisted toilets work differently. They contain a sealed tank unit inside the cistern. As water is pumped into the cistern, air inside the tank is pressurised. When the flush is activated, this pressurised air helps to push the water out faster than it might otherwise be delivered with gravity alone. Pressure-assisted cisterns rely only on the pressure of the incoming water supply, and don't need any extra pumps or other powered assistance. 3 Easy Ways To Get Rid Of Bathroom Mould

How to have the best wine tasting experience in Hunter Valley