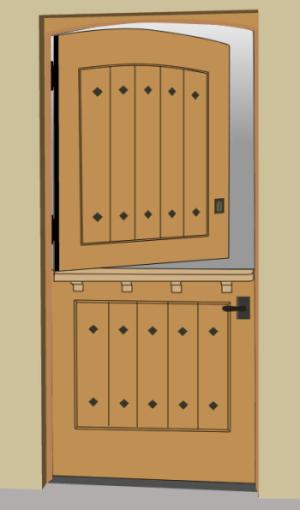 Dutch doors are often used in farmhouses to keep animals in or out, but there's no reason they can't be used elsewhere for any number of purposes.

What is a Dutch door or stable door?

We've all seen them before, and when they're referred to as 'stable doors' it's usually quite clear what they are. A Dutch door (or stable door) is a hinged door that is split horizontally in the centre, allowing the top and bottom halves to open and close independently of each other. These doors are still used in farmhouses to allow light and air in through the top portion, while keeping the bottom half closed to prevent farm animals from getting into the house. They are also used in stables to allow horses to be fed while keeping the animal safely inside.

How do Dutch doors work?

The door is usually split along the centre, though the upper panel can be less than half of the door too. Hinges are affixed to both the upper and lower halves, usually a pair on each portion for stability, as the doors are likely to sag if they rely on a single hinge. The main lock for the door is attached to the lower panel, but the upper panel will usually have a hook or bolt of some kind to allow it to be either propped open or locked closed. In many cases, it's also possible to lock the top portion to the bottom portion, effectively turning the door into a basic hinged door.

Where are stable doors used?

In modern homes, these doors often crop up in kitchens, where they allow you to serve food through the top portion while keeping the lower part locked to contain pets and toddlers. Obviously, they're still used in stables and farmhouses too...

What kinds of variations are there on stable doors?

Some Dutch doors have upper panels that consist of glass, while leaving the bottom half solid, although the most conventional-styled Dutch doors are still made of timber. Any number of variations can be made to Dutch doors to suit all sorts of unique needs, though.