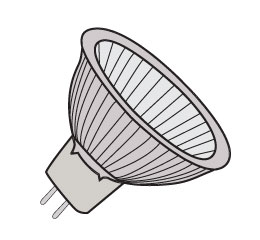 Developed in 1958, halogen lamps are a variation of incandescent light bulb technology that can burn much brighter, but also much hotter than standard incandescent globes. They have largely found a place in residential downlights and other applications for which very bright, directional light is considered most appropriate - although halogen globes are also available as a direct replacement for incandescent globes.

Halogen lights are especially good for task lighting purposes for activities like reading, and they have been a very fashionable feature in Australian homes since the 90’s.

Halogen globes work using a similar principle to that used for standard incandescent globes – by running electricity through a metal filament which heats it and causes it to glow. The difference with halogen globes is that the filament is made of tungsten, and that it is contained in an inert gas with a small amount of a halogen. As the light operates, a cycle known as the ‘halogen cycle’ occurs between the tungsten and the halogen, which protects the filament and considerably improves the lifetime of the globe. Halogens have a considerably longer life expectancy than conventional incandescent light bulbs.

Compared to an ordinary incandescent bulb, an equivalent halogen lamp is approximately 10 to 20% more efficient. Unfortunately, they also produce a lot more heat, which poses a major fire risk.

A 100W halogen bulb can generate temperatures of up to 200°C.

Problems created by overheating downlights are not a new phenomenon. It has long been reported that when heat generated by the stylish lighting mixes with loose, flammable insulation in the roof cavity, the results are potentially disastrous – sometimes even fatal.

As a result, the placement of the halogen-based lighting fixtures, the use of a suitable enclosure or barrier, and the proximity to insulation are all factors that need to be carefully considered during the installation process.

While a halogen globe is undoubtedly more efficient to run than a standard incandescent globe, the differences aren’t as dramatic as they are with other globe types like CFLs and LEDs. In most cases halogens are installed as directional downlights, and when considering running costs it’s worth remembering that you may well be installing four or five lights where traditionally you may have only had a single globe.