How to recycle a CRT television 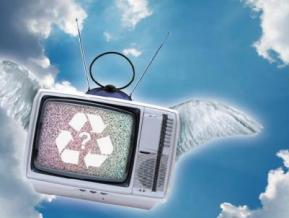 Beside the fact that they're now an outdated technology, CRT TVs take up a lot of room in your home - especially if you're not using them. Many people these days are replacing their CRT televisions with newer plasma, LCD or LED models, and aren't sure how to get rid of their CRT televisions. Don't despair though - there are ways to get rid of your old CRT TV without damaging the environment, and even some ways that can see a little cash making its way back to your pocket.

The average CRT television contains over 2kg of lead, and releases toxic material when it finds its way into a landfill. Keeping your old TV out of landfill is a good idea, and recycling it is one way to ensure that these toxins won't pose a risk to the environment. If you're looking for places to recycle, visit Planet Ark's Recycling Near You website.

While it's very tempting to donate your television to the Red Cross, Vinnies or a similar charity, you may want to check with them first before doing so. In most cases, safety laws will prevent them from redistributing your TV without having it electrically tested and tagged to say that it's safe - which is something they're unlikely to be able to pay for.

The Australian government is currently working on a scheme which is expected to be phased in by late 2011, to recycle old CRT TVs and computer monitors. Consultation took place in March and April, with a legislation marking for mandatory disposal of products being passed in June and applicable to all states and territories.

It's that time every six months where you can clear out the shed with broken bikes, chairs and unused TVs. Many councils are now taking action, ensuring that televisions placed in hard rubbish collections do not make their way into landfill. Talk to your local government to ensure that what you leave on the nature strip isn't going to be dumped anywhere else.

Regardless of how you feel about it, there are still people who are willing to buy a CRT television, if the quality is right. Whether it's for budgetary reasons, or people looking for a simple, stable TV that the kids can't knock off the cabinet, there is still a market for CRT TVs - you just need to know where to find it.

If you're not concerned with profit, look to sites like FreeCycle, which will let you give your television away to a good home. Not only can you get rid of that old TV, but you might even find something you need in the process.

If you're looking to sell your TV you can also look to eBay or Gumtree. While the competition may be high and the wait for a buyer may be long, consumers know just where to look to find second hand products. If the price and quality is right, you just might be in luck.