How to tile and waterproof a bathroom

Tags:
Tiles
Bathroom
Kitchen
Laundry
How to build a house

[caption caption="Small plastic spacers between tiles help to set them nicely in place with a gap for the grouting." align="right"] 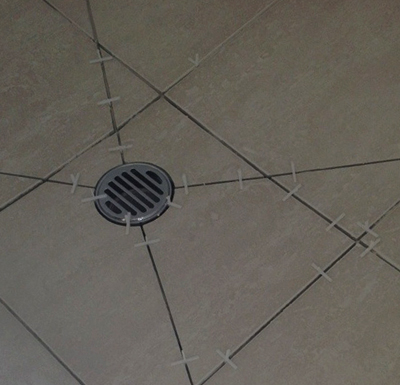 Once the plasterboard’s finished and the internal wall and ceiling linings are all sorted, it’s time for the bathroom, laundry, kitchen and powder room areas to be waterproofed. Basements also need to be very carefully waterproofed – but that’s only relevant if you're building a basement (they're relatively rare in Australian houses), and something that’s taken care of when the basement is constructed.

Why is waterproofing so important?

Proper waterproofing in wet areas is absolutely vital – water leaking into floor and wall spaces can very easily rot structural timbers and do some heartbreaking damage to a house. The worst bit about this kind of damage is that you won’t normally realise it’s happening until the worst of the damage has already been done.

Terrible damage from badly installed waterproofing has been a big problem in Australia in the past, and to deal with that there have been quite a few changes to the waterproofing requirements in recent years.

Can I do my own waterproofing?

DIY options do exist, but there are some caveats. In Queensland and NSW, you can only do your own waterproofing if you’re licensed to do so (i.e. the work must be done by someone with a licence). In other states and territories no licence is required, but whoever you're hiring has to provide written assurances that the work has been done in accordance with the Australian Standard AS3740-2010 - 'Waterproofing of domestic wet areas'. It's worth mentioning that the Standard outlines the 'minimum' amount of waterproofing protection required.

If you do your own waterproofing, it needs to be done to the Standard and must be able to pass muster with a building inspector. You'll also need to consider the fact that it may impact on any insurance or warranty claims further down the track. Waterproofing is one area of your home that absolutely has to be done right to prevent serious damage from water and damp further down the track.

How is waterproofing done?

In Australia, waterproofing involves painting a liquid rubber membrane onto areas that are likely to see water, so as to create a kind of ‘sealed’ area. Obviously the purpose is to help contain any water that might leak out (perhaps through failed grouting or joins, or leaky plumbing fixtures), so that it doesn’t cause any damage.

The waterproofing membrane is normally applied under the edges of the polyfab bandage to ensure that it’s fully soaked through and to make sure it properly adheres to the wall or floor. The membrane is then painted across walls and floors using a roller. Typically two coats will be used, the second one rolled at right angles to the first (i.e. if the first coat is rolled vertically, second coat rolled horizontally).

Where is waterproofing required?

Waterproofing is generally needed anywhere where there’s a water outlet. This includes:

How high and wide walls and floors will need to be waterproofed depends very much on what’s being waterproofed, and on the other materials that are being used in that area.

Shower recesses, for example, normally require waterproofing to a height of 1800mm. How far along the wall and floor the waterproofing membrane needs to extend will depend on things like:

The materials that are used in the floor of a bathroom will also play a role in what’s required for waterproofing – for instance, while compressed fibre cement floor and concrete floors might offer water resistance themselves, if the bathroom floor uses timber-based materials like plywood or particleboard instead it’ll need to be fully waterproofed.

How are tiles put up?

Once the waterproofing membrane’s been installed – and after it’s been left undisturbed for a couple of days to properly cure – it’s time for the tiles to be put on wherever they’re required. If you’re going with a built-in shower base, the mortar bed / screed for the shower will also need to be put in before the tiles go on.

Installing tiles isn’t a terribly difficult process – but there are a few stages:

How long does waterproofing and tiling take?

How long it'll take will depend on how many people you've got on the job, but because there are waiting times for the waterproofing and the tiling to set properly, this part will probably take at least a week.

Which tradespeople do this work?