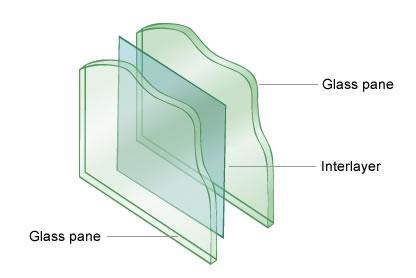 Laminated glass is commonly used as a safety glass when security and injury are of concern. It comprises two pieces of glass with an interlayer commonly made from polyvinyl butryal. The glass is prevented from shattering as it remains stuck to the interlayer creating a ‘spider web’ effect. Laminated glass looks like a single glass pane and is virtually indistinguishable from ordinary glass.

The benefits of laminated glass

Laminated glass is a durable and versatile glazing material providing a number of benefits. These include better protection against UV rays which can fade furnishings and carpets. Laminated glass can also help to lower noise levels, especially when it is used within double glazing. However, the main benefit of laminated glass is its safety performance. Similar to glass used in car windshields, laminated glass is harder to break and offers greater security against accidental injury, attempted break-ins and severe weather conditions. The bond between the glass and interlayer combine to absorb the force of an accidental collision, resisting breakage. If the glass is broken, the shards remain stuck to the interlayer rather than breaking apart and potentially causing injury.

In the case of an attempted forced entry into your home, laminated glass will take at least two blows from a hammer to break. The interlayer will then hold the broken glass in place, requiring further blows to create a hole and gain entry into the home.

What to look for

Laminated glass can be used with a variety of glass types such as such as low-emissitivity and toned glass. These glass combinations are useful in reducing heat gain from sunlight and ultimately reducing air conditioning costs.

By specifying thick laminated glass you can effectively reduce outside noise though this will have little impact on thermal performance. The thicker the glass, the better the noise reduction for low frequencies such as traffic noise. This is because sound waves become disrupted when they have further to travel. The interlayer can also be manufactured to reduce higher frequencies such as aircraft noise and voices.

Laminated glass can deteriorate when the edge of the laminated glass is in contact with water over extended periods, such as condensation. Prolonged exposure to water will cause the interlayer to separate from the glass surface.

Being a safety glass, laminated glass is difficult to break. This is useful in securing your home against intruders but a hindrance if you need to escape in an emergency. Ensure alternative escape routes are possible when laminated glass is used.