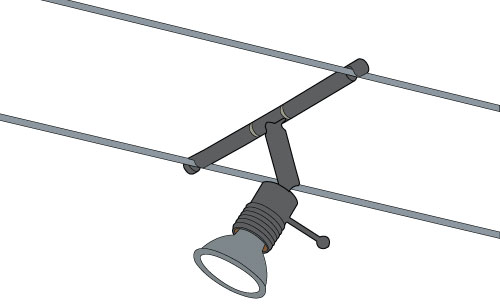 Cable based light fittings are a good way to provide task lighting in areas with high ceilings.

What is a light fitting?

A light fitting is an assembly that contains all the elements of a light. At the most basic level, this always includes some kind of electrical connector, a light socket to hold the globe in place, and the globe itself. Different types of lights will require extra hardware to operate too - halogen dichroic globes require transformers, for example, and fluorescent globes need ballasts if they're not built in.

There are countless different variations on light fittings, including (just to name a few):

How to choose light fittings for your home

In the past, setting up lighting in your home was a pretty basic affair. It wasn't that long ago that it was a simple matter of throwing in a few incandescent fittings or, more recently, long rows of halogen downlights wherever light was needed. Recent changes to regulations, however, mean that now you're only allowed to install 5 watts of lighting per square metre of floorspace in new homes (with a few conditions). These changes mean that lighting now needs to be far more carefully considered!

If your lighting's wrong, your house may not pass inspection - which is a big deal. When you're planning your lighting, it's a good idea to consult with a lighting designer, or at the very least ensure that your builder and electrician have made the necessary considerations with respect to how your light fittings are laid out.

Lighting may well be the main part of your electricity bill. Compact fluorescents are the way to go for general lighting. LEDs are very nice for architrave lighting, and generally for as a direct replacement for halogen downlights. Consider directed lighting (for example LED globes) for work areas, rather than brightening up the whole room, so as to have adequate lighting where you are working.

Tungsten halogen lamps (dichroics - or halogen downlights, as they're commonly called) are low voltage lamps and require transformers to operate. Halogen globes use significantly more electricity than the alternatives for the same type of output, so if you're building from scratch it's a very good idea to consider alternatives. LEDs also need transformers and there’s slight delay (about half a second) before they light up after switching on, although they only use a fraction of the electricity consumed by halogen globes. Not all LED globes are created equally though - and it pays to understand what to look for when you're buying them.

Modern dimmers, electronic dimmers that is, don’t waste much energy - something of the order of 5-10% of the total consumed power. Along with your choice of lighting though, it pays to be judicious in the number to be installed. Under the new lighting regulations, the installation of dimmers can also be used as a concession to allow more lighting to be installed. To find out more, discuss your options with a lighting designer or your electrician. What Pillow do Doctors Recommend for Neck Pain?