Circuit breakers are used to isolate different parts of your home's electrics if they pose a risk.

A circuit breaker is not a switch

A switch like the one on a power point is there to switch ‘normal’ current on and off. They are absolutely not suitable for anything else, including switching off a very high (‘abnormally high’) current.

What are overloads and short circuits?

Short circuits are different - these normally represent a current many times higher than the MCB's rated capacity. Our 6 amp MCB, for example, may treat an electrical current of 120 amps (20 times rated current) as a short circuit. What electricians call a dead short (the proverbial nail across the power point) would produce a current of that order. Dead shorts are extremely dangerous and neat to be ‘cleared’ immediately - and this is when a MCB automatically 'trips' or switches off.

MCBs distinguish between overloads and shorts using a two-step tripping mechanism. One is a thermal element - a bi-metallic strip that responds to heat, which is designed in a way that allows it to react based on the amount of current that's flowing, and on the amount of time for which it flows.

The second part is a magnetic element. It is a coil of wire, and current flowing through it creates a magnetic field acting on the tripping mechanism. It's this magnetic element that causes very rapid disconnection if there is a short circuit. 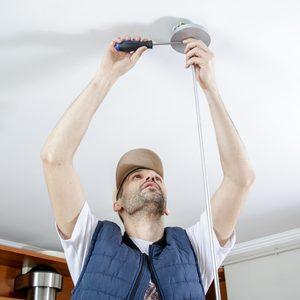