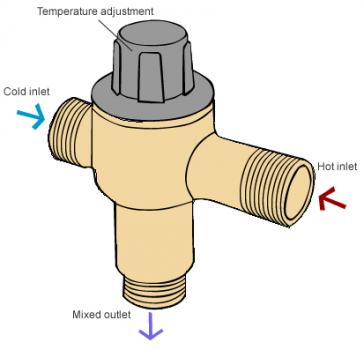 A tempering valve contains a thermostatic element to limit the temperature of the water at the tap.

It is mandatory across all states and territories throughout Australia that all storage tank hot water heaters are set to heat the water inside them to a minimum of 60°C. This is to kill any bacteria living in the water, as it will be sitting in one place until drained from the tank through the hot water pipes. It's worth remembering that setting the temperature much higher than this may also increase your running expenses.

Another state-based law that has been adopted throughout Australia is the regulation on how hot the water can actually be when it comes out of your showers and taps. To prevent painful accidental scalding injuries, hot water coming out of your taps shouldn’t exceed 50°C.

The difference in temperature between the requirement for your tank (60°C) and for your taps (50°C) will solve itself in some cases due to the heat that’s lost as the water travels to the taps. Where it doesn't though, the most common solution to this issue is the installation of a tempering valve.

What is a tempering valve?

A tempering valve is a water mixing valve, designed to limit the temperature of water coming out of your taps and shower heads.

Without getting too deep into the way it works, the valve contains what's known as a thermostatic element. When hot water is drawn into the valve, it 'tests' the temperature of the water from the hot inlet and allows in enough cold water to bring the temperature down to the set level (i.e. 50°C). A tempering valve will often be installed along with your hot water system, but you should make sure this is included in the quoted price for installation, and that it's been properly set up to ensure that the temperature's just right.