Terracotta tiles are found on houses throughout Australia.
Image courtesy of Boral.

What is a terracotta tile roof?

Terracotta, which literally means 'baked earth' in Italian, is a type of clay-based ceramic which is used to create roof tiles.

Tiles made from terracotta are a very commonly used roofing material in Australia and around the world, and they've been widely used on roofs for a very long time. Terracotta tiles are available either unglazed, in their distinctive, natural red-orange colour, or glazed to provide different finishes and colours. Terracotta tiles are installed by placing overlapping and interlocking rows of tile on the roof, and are available in a range of styles to suit both modern and more traditionally designed homes.

Terracotta is very hardy and has been known to last hundreds of years if it's treated right. Terracotta is also waterproof and fire resistant, offering good protection from the elements.

The durability of a complete, tiled terracotta roof also comes down to how well it's constructed and maintained. Regular maintenance will help to prevent infestations of lichen or moss and to ensure that tiles aren't displaced, which in turn will ensure the ongoing strength of the roof.

Terracotta tiles weigh more than steel roofs, but less than concrete tile roofs. Because the tiles have a tendency to be brittle, care must be taken when things like solar panels and solar hot water systems are installed on terracotta roofs.

Because of their inherent thermal mass, terracotta roof tiles are able to absorb heat during the day and release it during the night, which makes them an energy efficient option in cooler climates. Terracotta tiles can be coloured and treated to significantly improve their ability to reflect heat from the sun too, which means they're also a viable option in warmer, northern parts of Australia.

Terracotta tiles offer natural insulation on their own, helping to keep both heat and noise in or out of the house.

Tiles can be purchased in different shapes (or profiles), which vary according to the pitch of the roof, the climate where they're being installed, and whether or not you're after a traditional or more modern style of home.

Interlocking profiles help to keep tiles in place on more steeply pitched roofs for example, while other aspects of the tile may be designed to assist with drainage at certain pitches.

Where are terracotta tile roofs installed?

Terracotta tiles are suitable for most climates throughout Australia, but are less favoured for snowy climates where the wind can drive the snow in between tiles and create leaks. Terracotta tiles also offer good fire resistance and may be used in fire-prone areas. 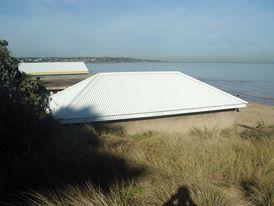