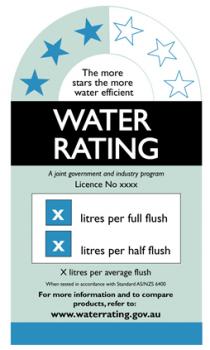 The toilet WELS label shown here indicates the amount of water used at each flush, and how efficient the toilet is as a star
rating.

In 2005, the Australian government introduced a scheme called the Water Efficiency Labelling and Standards (WELS) scheme. Under the scheme, products that use water must be tested under standardised conditions in a laboratory by a government regulator. Each product is given a comparative rating score to indicate the product's efficiency (between 1 and 6 stars). The scheme is very similar to those used for energy rating labels for things like gas and electric heaters and airconditioners.

The WELS scheme was put in place to help reduce unnecessary water usage, and is now projected to save Australians up to 800,000 megalitres of water by the year 2021 - a figure that amounts to about a billion dollars of water bill savings. The effect of the WELS scheme can also be calculated in terms of a reduction in greenhouse gases, and is claimed to be the equivalent of removing 90,000 cars from the road each year.

Which products have WELS labels?

Under the WELS scheme, bathroom products that need to be rated in Australia include:

Water efficient shower heads in homes account for a lot of the water savings (up to 25%) under the WELS scheme. This is mostly due to the huge differences in the amount of water used, and in the savings that adds up to per household. A standard shower head uses between 15-25 litres per minute of water, while a 3-star shower head only uses 6 or 7 litres per minute. Using a basic water-efficient shower head means you use about 40% less water. Another benefit is that as a result, you also use about 40%-50% less hot water, cutting your gas or electricity bills in the process.

WELS ratings apply to taps over kitchen and bathroom sinks and laundry troughs, but not to those used over baths. The reason for this is pretty clear - you're going to use the same amount of water to fill a bath no matter how fast the water flows! Water efficient taps use an aerator to mix the water with air, and in the process can cut the amount of water used from 15-18 litres per minute down to about 2 litres per minute.

The WELS scheme requires toilets in Australia to meet a basic level of water efficiency. An average flush is calculated for one full flush and four half-flushes for each toilet. For a toilet to comply with WELS, this average can't exceed 5.5 litres per average flush. As with showers, water efficient toilets make up a large amount of the water savings under the WELS scheme, account for roughly 22% of the overall savings. Where a standard, traditional toilet used about 12 litres per flush, modern water-efficient dual flush toilets use, on average, less than 4 litres per flush. This amounts to savings of about 51 litres of water per person, per day, and can add up to $500 less in water bills over a ten year period.

Whether you're choosing products for a new home or simply wondering whether to replace old fittings, it's a good idea to consider WELS labelling, water efficiency and the kind of savings you can make over the long term.

Visit the waterrating.gov.au site for further information on WELS ratings.