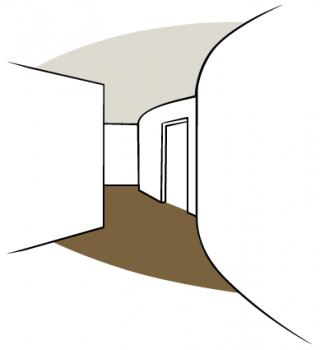 Curved walls can change the feel of a room.

With the exception of the quirky and the postmodern, the exterior walls used in most modern homes tend to be fairly similar. This is partly because the status quo is fairly safe, both structurally and in terms of resale value and appeal. For example, an oddly shaped wall that is incorrectly angled has the potential to trap and then deflect sound, actually creating a howling noise which can be disruptive.

Having said that though, sometimes it pays to build with a difference. Testing has shown that rounded walls (those that lack right-angled corners), such as those made from cob, often withstand earthquakes more successfully than straight, right angled walls. Likewise, besser blocks, though widely regarded as pretty ugly and rarely used, can be used in ways that offer excellent seismic protection. Unfortunately, in most cases unusual designs tend to be more complicated and expensive to construct, and more difficult to have approved by local councils.

Curved or moulded internal walls don't suffer the same issues, of course. Partition walls in particular can be designed to curve on any angle, provided that you're using plaster or a similarly versatile wall material. If you're planning curved internal walls, keep in mind how they will deflect light and sound, as well as how the curvature of the wall can reduce the effective usable space in a room.

One element that often differs is the width of external walls. Width has a great influence on how a wall responds to the techniques of passive design. Passive design takes advantage of natural elements (such as wind, sun and shade) to heat and cool your home. It has been found that in most cases, a thin wall is likely to transmit heat much more quickly than a thick one.

In a hot climate, thick walls may help to keep your interior cool for longer. The thickness of a wall also relates to its ability to absorb and retain heat (this is called its thermal mass). Using thermal mass, thick walls can be used to heat your interior by allowing the wall to absorb thermal energy from the sun during the day, and then release it into the house as the temperature drops. This technique is more suitable for climates that have some variation in temperature, of course. The ability to absorb and radiate heat is not a good quality for a wall in the tropics.

When planning a home, first try to choose a good building site, and then carefully assess which way your walls and windows should face. Correctly planning your wall and window orientation will let you make the most of winter sun, exclude summer heat and capture and harness summer breezes. A poorly oriented home or land site will do the opposite, making your living spaces uncomfortable, costing you more on heating and cooling and wasting natural resources.

Generally speaking, a home which runs along an east-west axis will miss the worst of hot morning and afternoon sunshine. Avoid blocking north facing windows with east-west walls. In high density housing where solar access is blocked, building multiple storeys can help you capture more heat from the sun. Locate doors and windows in places where they can funnel breezes through the house. In conjunction with orientation, you should insulate your walls and apply the principle of thermal mass to walls if it is appropriate for your local climate. Contact your local council and analyse yearly and daily temperature ranges to ensure you use these techniques in a way that responds well to your climate.

As a rule of thumb, in colder climates throughout the southern hemisphere it also makes good sense to arrange your living areas so that their windows face in a northerly direction.